My first job after leaving school in 1961 was in TV broadcasting with the BBC, based in London. I was a sound engineer which involved everything from mixing sound, operating a boom microphone, playing back music and sound effects.


My early years at the BBC were just great! What I did was attend a course at their Training School in Evesham which ran in parallel with a university degree course but with the advantage of including periods in real live broadcasting as part of the training.


To have chosen sound in preference to cameras stood me in far better stead for later in life because it was very technical, not only about transmission of signals over long distances but also theory of the transistor, holes and electrons. Much smirking at holes because to young guys that had a double meaning. But I don’t think I understood the joke till much later. 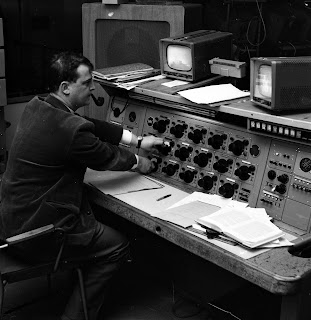 It was a kind of sandwich course with periods at TV News which at that time was at Alexandra Palace in the north of London from where the first TV transmissions came in 1935.  Here is a photo of my fellow student mixing the evening news, I would have been standing at a bank of gramophone turntables providing sound effects because much of the film coming in had no sound, it was “mute”. But we took turns in mixing the programme. Did you hear me correctly? At the age of 20, I was twiddling knobs on a sound desk with the voice of President Kennedy and many famous people. This was the main national news, followed by the regional news and all was a desperate flurry of paper, called flimsies, with late changes to the schedule. The actual sound supervisor was approaching retirement and had little interest in his job. He just sat at the back of the control room puffing his pipe.


This was 1963 so there were no satellites of course; film from the USA arrived at least 8 hours after the event by air. There were transatlantic cables of course, so we had sound but for much of the time it was telephone quality.


While I was at Ally Pally or AP as we called it, I nearly killed someone. I was still living at home in Woodford Green and drove my new MG Midget around the North Circular Road to work. At one point I had to take a right turn across a dual carriageway (what is it about right turns, not good!) and on one particular wet morning, maybe I was a little late but, from the central reservation I saw a car in the fast lane approaching but it was far enough away for me to start crossing. What I could not have seen was a motorcyclist approaching more rapidly in the slow lane, overtaking (or undertaking - that’s where he nearly ended up). In horror, I stopped half-way across the carriageway and the motorcyclist, terrified, with wheels locked skidded past the front of my car, I can still hear the sound. He stopped about 100m up the road, I cannot imagine what he was thinking because a few more inches and he would have been dead, absolutely no doubt about that because of the speed at which he was travelling. We never spoke. After we both got our breaths back, we each continued on our way. Imagine the difference that would have made to my life. I guess I would have tried to console myself by thinking that maybe it was his fault. But I would have been responsible for his death. And, in any case, I should have waited till I could see both lanes were clear.


Just before I get back to the BBC I must tell you something funny which is rather linked to that horror story. For a while, the offside mirror of my car had no glass in it. But I still looked at it, “Ah, I see nothing coming, so I can turn...”


After the time at AP all the practical training was in Outside Broadcasts, but part of that was at “base” which at that time was near to Wembley Stadium in London. Base was a very unromantic place, a large garage really where all the trucks (including the mobile control rooms) were stored. Then there was a workshop area for repairs to equipment. So we all longed for the period when we could be out on the road. There was a programme but before my time there, Saturday Night Out, which showed a phone ringing and then a voice over the vehicles streaming out of the base, “We’re starting now!”


It wasn’t actually quite as romantic as that because most programmes were planned in advance. I only ever once travelled to a site actually in the vehicle, it was a gas explosion in a block of flats, Ronan Point in London, and we had to get on air very quickly. The trucks were driven by rigger drivers who would also install the cables on site. The technical crew would arrive a day later like prima-donnas.


There was a TV outside broadcast from a swimming pool in London and I think the director wanted watery gurgling sounds for underwater shots. As I pulled a condom over the microphone, a girl in the pool watched on, fascinated. I said, “You know what this is for, don’t you?” Two ways you can take that, I’m not sure even now which one I meant. 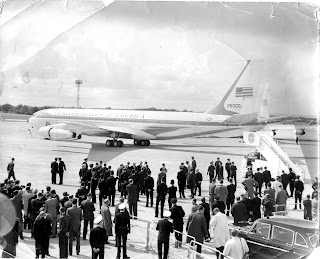 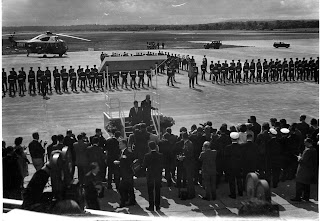 I included some photos of a momentous occasion for me (one is an original print, the other is scanned from the negative). During my training when I was working on News, I was sent along to Gatwick Airport to witness the arrival of President Kennedy on his way to a private visit with Harold MacMillan who was Prime Minister at the time. Two Boeing 707 jets arrived, Air Force One in the same pale blue livery as the current version. Out of the first came many journalists and from the second came John F Kennedy. Later, of course the poignancy of this visit became clear. The President had made his famous speech in Berlin, then visited his sister’s grave in Ireland and, after seeing the Prime Minister, was heading home. Six months later he was dead. The photo below is overlooking the River Thames at Runnymede at the consecration of the memorial to President Kennedy. It is a wide angle so you can't see any details but in the white dress is Jaqueline Kennedy and next to her, the Queen and Duke of Edinburgh.


I could fill a book about my experiences with the BBC – I was working in St Paul’s Cathedral for the funeral of Sir Winston Churchill, the saviour of the free world. 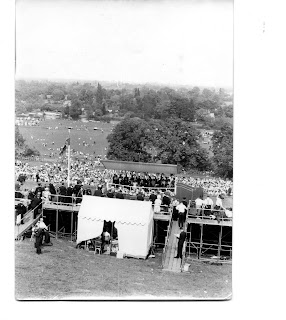 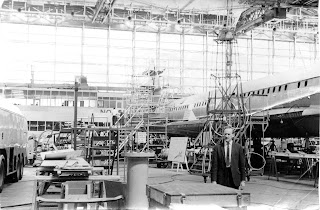 Can you recognise the plane? This is the (protpotype) Concorde 002 being built in the British Aerospace factory in Filton, Bristol. It first flew in April 1969. We were making a programme about the plane and it was illustrated with other delta-wing planes which flew across in front of us to demonstrate how the delta wing differs from a conventional wing with flaps. I stood there thinking, "I am being paid for this?" I was in a junior role, basically installing sound gear so I had plenty of time to watch.

I had a burning ambition to be a sound supervisor, those words were magic to me but I always had a doubt I would make it, partly because my hearing was far from perfect on account of an accident where my skull was fractured (I wrote elsewhere about that). On many occasions I was acting in that capacity because I was the SA1 (sound assistant one) in one of the mobile control rooms (this was after I completed the course at Evesham). This position meant being responsible for the sound equipment and also mixing the sound for many events. But for major programmes, I would take one step down and a “real” sound supervisor would control the sound. My friend Keith, a contemporary, actually my junior but not for long, went on to have a glittering career in the BBC as one of their senior sound supervisors. Maybe I was not made of the right stuff, a bit of a rebel, not a corporation man. Now we have self-admiration sessions. He admires me for going alone into business and I gaze in awe at his career in the Beeb. 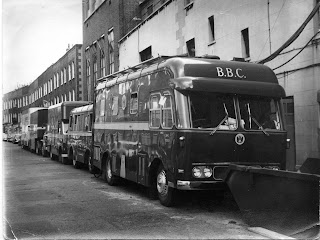 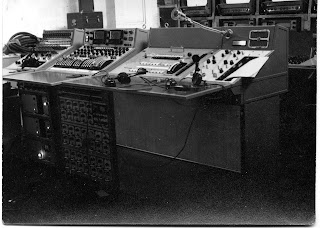 This is a typical scanner, parked outside a theatre. I think it was Sadler's Wells in London. Below is the control desk derigged from the scanner. We had just taken delivery of the scanner so this was to check out the system thoroughly. The three desks are, communications, sound and, with the microphone, the desk for the director who also operated the vision mixer. The director's PA would sit on the bench seat behind us. On one ocassion one of them had the most overpowering perfume. I remember her getting the bottle out and saying, "Stand by for blasting!"

I had one disaster when I went out for an afternoon when I should have been in the control room for a folk concert and that rather sealed my fate because the concert couldn’t go on without me. The sound system for the concert went through the sound-desk in the scanner - the control room. So even if we weren’t broadcasting I still had to be there. But I had gone off for a jolly jaunt with the cameramen who obviously were free to go.


I left the BBC, jumped not pushed, and started making timing equipment for sports events inspired by Omega which provided most sports timing at the time. But before I tell you about that, I’ll tell you about Thames TV because the two threads overlap in time.


I also worked freelance for various companies and I included a picture from The Sun showing me with a certain lady who had just won an election. At this time I was basically down and out, very little money, driving a mini-van. I worked for an independent TV company called Intertel and effectively worked as a sound supervisor under their head of sound. The studio had no control room; that was a mobile control room in the car park with a bunch of cables running into the cavernous studio. Then they could up-sticks and go and do an outside broadcast.


We often worked for American networks. I was in Paris during the Vietnam Peace Conference and nearly got stranded on account of the students' riots. I was due to head back to the UK to mix an episode of Jackanory, a children’s programme of the time.


I worked on filmed commercials, taking a day to record two minutes of material. TV is bad enough, waiting for things to happen but film is worse. This was film, literally. Now of course, everything is shot on video.
Posted by Steve at 02:34