When I returned from Penang on the Sunday evening there was no certainty about how long I could stay in Bangkok. The first thing I did when I got to my room was to try to sort out the shambles which was my onward flight to Hong Kong. I had miscalculated how long I was going to stay in Penang and had left myself with just one day in Bangkok whereas I wanted to spend the whole week there and leave on Friday. At the time when I arrived in Bangkok I was scheduled to travel on to Hong Kong the next morning! This was out of the question but if I just failed to show up and book a separate flight to Hong Kong on Friday, my long flight back from Hong Kong to Barcelona would have been wiped out by a soulless computer in Dubai. I spent 40 minutes on the phone to Dubai at a cost of 100 euros. This was doubly galling because I could have used the hotel phone and called Dubai via a local call but I wasn’t sure whether I would end up speaking to Emirates in Dubai or Bangkok.


Finally, finally, by talking to someone in contracts department I managed to erase my flight the following day (obviously without any compensation) and still retain my Hong Kong to Barcelona sector which had really been worrying me. And the man in Dubai had the cheek to say, “As a special concession”. Excuse me I am an Emirates Business Class passenger with a Skywards loyalty card and you treat me like this? So, I booked a new ticket for Friday, in Economy Class because it’s only a 2 hour flight and the A380 is so big that economy in this plane is like Business Class in many others. So, I lost a Bangkok-Honk Kong sector, lost 100 euros on a stupid phone call and paid 180 euros for a new ticket.


I went to bed greatly relieved but fuming at how a passenger can be so casually dumped by an airline whose name I see almost everywhere. Where is my graffiti spray can?


So this was a perfect time for a beer and something to eat in the restaurant. Next day I used the hotel wifi to check my email and to plan what to do with my stay. The first thing I did was to look up Meetup groups in Bangkok, or to be precise to look up the calendar for the week ahead. I saw two groups which were of interest; one was arranging a walk to a temple then to have lunch so I joined them. And they had a similar event later in the week so I went on that too. On the second walk we visited The Artist’s House which is right next to one of the canals which was very exciting with long-tailed boats whizzing past. If you’re not familiar with these boats, they are driven by a truck engine at the rear with the propeller on the end of what would have been the prop-shaft in a vehicle.


The group wanted to have some food at 12 but I wasn’t hungry but I had seen a massage shop next to the canal so I went back there. I found one of out group, a Thai lady, who had had the same idea so we both had a Thai massage. Hey, no smirking this time! A genuine Thai massage with lots of pulling and kneading. Anyway the two people doing the massage were about my age! No young girls in slinky red dresses (unfortunately).


The other Meetup group I found was an art group and they had scheduled a life class for one evening and I signed up to go along. I had all my art materials with me but only had rather expensive watercolour paper which was rather wasted on quick sketching which is what basically happens. I nearly put my foot in it at the start because the organiser and model greeted me and they both looked slightly foreign so I asked where they were from. “Middlesborough” one replied. Er, yes, sure! Anyway, I should have recognised the very obvious English accent.


If you’re not familiar with life class, it’s not really a class in the sense of a school but the custom is for the model to be nude and for the artists to be given 5 minute, 10 minute and longer spells for sketching various poses. There were about 10 of us there and the evening passed very pleasantly. The meeting was upstairs in a bar and downstairs there was a fish and chips restaurant so you can guess what I had for supper after the drawing! They even had wine and it was not too expensive. 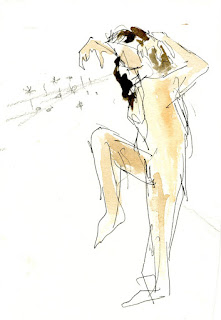 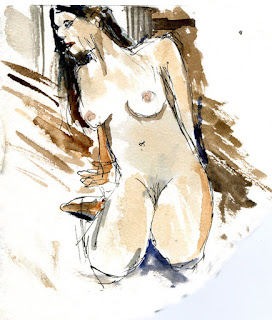 The hotel was perfectly placed right opposite the National Stadium Skytrain station so I often used to hop on the train, either to go to the Siam Shopping Mall just one stop away, to the river or to the Meetup groups. It is all on pylons above ground so one gets a wonderful view of the city. None of the buildings are very tall. There is also a Metro but I never used that. I took the train once to the Chao Prao River and took a boat trip up past the Royal Palace but I didn’t stop off there, I visited it last time I was in Bangkok. I have to admit I spent quite a lot of time in the shopping mall and another place which I liked was right next door to the hotel, The National Art Centre. In fact, at the end of the week, by chance I met the walking group organiser there while I was having a pendant made. A small studio offered a do-it-yourself silver pendant using silver clay. This is basically pure silver in a clay suspension so it can be formed into whatever shape you like. Then it is cooked in an oven and the clay falls away leaving the silver. The size is reduced by about 30%. I chose the logo that my cousin Richard designed for my company many years ago and which I still use on my website. It is rather like an arrow pointing into a circle. So I and my young helper hacked away at this small piece of (what looked like) clay until I got what I wanted and off she went to put it in the oven. My walking friend said “he” – I corrected him. But then many young Asians can pass as male or female and sometimes the only way you know if by what they are wearing. . I bought a chain in Manila. The pendant doesn’t trigger security systems at airports so it never leaves me.


The hotel had the most impressive breakfast buffet, I must tell you about that because they seemed to be catering for at least 3 or 4 different cultures. For us westerners, there was a card on the table where we could order eggs and bacon “sunny-side up, over-easy, scrambled?” Of course, cereals, fresh fruit. And food for Thai, Chinese tastes and who knows what else. And it was a huge space.


Two days before leaving, I booked the Ibis North Point in Hong Kong (from an Ibis Hotel using the Ibis website and with my Ibis loyalty card). I entered my bank card details and thought that was that. Half way through my final day, Thursday, an email arrived which said that my card had been refused and could I use an alternative one before 6pm otherwise my booking would be cancelled. Nice eh? But I was out all day, missed the deadline and lost my booking. And because it was a promo for advanced booking it was not possible to re-book. I wrote to them, the duty manager at Ibis Siam wrote to them. To this day I never heard a dickie bird from them. Hey some people have no manners. So with not much time to spare I booked an alternative hotel in Kowloon. And the same thing happened but this time I was on a plane to Hong Kong so I missed the deadline again, obviously there is some kind of communication difficulty between Spanish banks and whoever handles Visa in Hong Kong. But when it came to pay the Ibis Bangkok there was no problem. By the time I arrived at the hotel in Hong Kong, the deadline had passed and my booking had been cancelled and so I had to start again and this time pay with my UK bank card. But this does seem rather unfair, to come back up to 24 hours later having accepted the booking and the payment and to say in effect, “sorry we’ve changed our mind”, and scrub the booking. And in the case of Ibis, I was actually in an Ibis hotel when I made the booking!


But it is a similar story to the one I received from Emirates when they gave me such a hard time. So many people abuse the system that they have to put in safeguards to block them but of course it hits the genuine traveller.


So on Friday morning, I checked out of the Ibis Siam, toddled across the patio and into the Skytrain station. 5 stops took me to the interchange for the airport express so that was really easy. Of course, had I retained my Emirates Business Class seat, the journey would have been by car as it was when I arrived. The train was probably quicker! Next stop: HKG!
Posted by Steve at 01:54