This story begins with a myth. I wanted to start this book with a young couple making love in a secluded forest glade, rolling around in the warm damp grass but since it was December 1942, the chances are that it would have been rather too cold for that and instead my conception would have been in a rather dull street in Chepstow in Wales...  warmer. But I still like to think that my parents had lots of fun making me. So amazed was I that my father managed to get back to the UK during the Second World War that later in life I sometimes wondered whether my mum had a little bit on the side, so to speak. I know she was rather enamoured of a doctor chappie but I quickly dismissed this and in any case, people say that I look like my dad. So let’s put that daft theory aside. Or maybe he left a small phial at home when he went to war and she kept it in the fridge…. Or maybe not. That is funny! Imagine, the world’s first test-tube baby in 1943!


So, my father went back to Africa and as the nine months passed, my mum returned to assailing him with almost daily letters about how life was in Chepstow. (This was a complete falacy which I believed for a long time! I just didn't think about it too seriously. I imagined somehow that he had come back from Africa but, at the time of my conception, he would have been based in the UK. He went to Africa, sure. but not "back" to Africa.)

So there I was. Born in August 1943 during the Second World War. So that made me a “war-baby”. My mother had been billeted with a couple (who later became my God-parents) in order to avoid the bombs being dropped on London. “Baby Boomers”, which one often reads about, came later when the war ended and the men who survived came home. What is frustrating is that most of my mother’s letters bear the date but not the year. They were generally mundane but also full of passion looking to the time when they would be together again. They wrote to each other using pet names which bore no relation to their real names.  But I have very few of the letters he wrote to her. 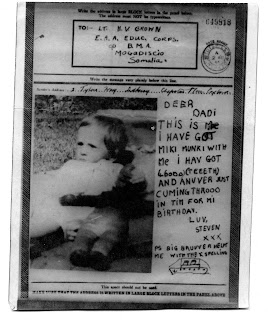 I have one letter that she wrote and it is what one would describe as a love letter, fairly unambiguous about what she was talking about. Sometimes I like to imagine that is when I was conceived because I guess it was some time during the war.


I even have the letter where she tells him about my birth (I also have the telegram “Boy, both well” which you can see). I guess they must have talked about a name for me – in those days of course they had no idea what sex their child would be. I think if I had been a girl, they would have chosen Jennifer. However, when it came to naming me, my father was back in Africa and mum agonised over the name and wrote a letter to him about it. But of course, before she received a reply, she had to make a decision and went for Stephen (she wrote that Steve sounded “racy”!!)


She then wrote about what she called the “circum op”. In those days from what I gather circumcision was common for babies, so it was routine to do it to me. For most of my life I accepted that and had no problem with it but only recently I started to think how brutal that is. To take a baby only a few days old and subject it to an operation to remove part of its body, not for medical reasons which was given later as the motive, but simply because it was the fashion. I am not even sure if an anaesthetic was used.


More letters followed, about my progress, how I was being fed, all kinds of trivia and also news about my brother Philip who was at school in Chepstow, being 7 years older than me. From what I remember, my mother had a miscarriage after Phil which accounts for the large gap between us. I was born quite late for her.


After the war, my father returned and we moved back to Woodford Green in Essex and he took up a teaching post in east London. After the passionate exchange of letters during the war, things were not so rosy in the real world. My father had a 3 year-old usurper to contend with – my mother absolutely doted on me which didn’t help further male bonding with my father. I often used to wonder to what extent this formed the way I am. But then physically I am a little different, not terribly masculine and I can’t blame my parents for that. 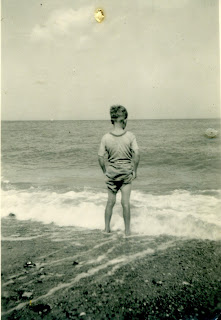 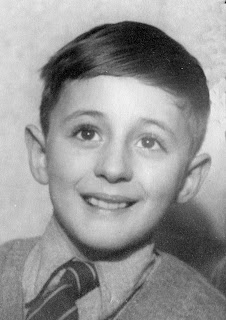 In my Red School uniform at 7 years of age.


I call the second photo, "pee in the sea", but I am sure I am just keeping my shorts dry! 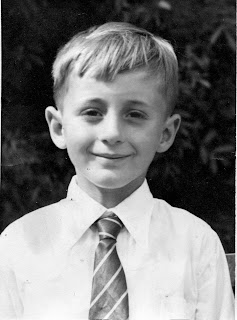 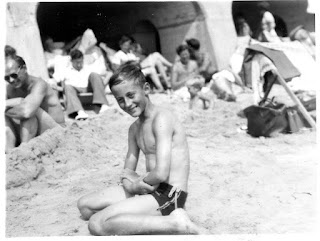 And so my life progressed fairly conventionally towards adolescence in a primary school called the Red School. But I was a bit of a drip, and rather priggish. I remember walking through a fairly rough area, we called it a council estate, in order to get to school wearing my bright red uniform. Talk about red rag to a bull! I don’t remember being beaten up but I certainly deserved it - probably too naïve to expect it. Later, Phil used to call me “Stainless Stephen”, which I guess I deserved.


By this time, Phil was at Chigwell School in Essex which is a public school in the old tradition – boys only of course. And, the year after he left to go to university at Oxford, I managed to pass an entrance exam and followed him there in his footsteps. I think his being at school there made a big difference to my being accepted.