I have done some incredibly stupid things in my life. Sometimes we humans get away with it, sometimes not. Often there is a very narrow margin between an escape and serious injury or death even. A traffic accident for example. Just being in the wrong place at the wrong time. 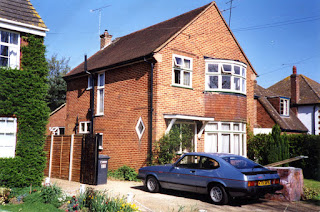 During the 1990s, I had a Ford Capri 2.8i which you can see parked outside my house. My friend Duncan lent me an electric polisher and some polishing compound which he said would improve the paintwork of the car. In fact, it had a metallic finish which meant that it had a varnish coat above the blue paint so there was nothing to be gained by polishing it. It was a bright sunny day, in the summer. As I polished the top of the bonnet, I looked into the body of the car to see what results I was achieving. I was also unwittingly looking directly into the sun. After a short while, I walked into the house. Everything that I saw around me was a dim green and yellow. I was very frightened. Had I damaged my eyes, virtually blinded myself? After about 5 minutes the little rods and cones in my eyes came back to normal. But that was a very scary moment!

I have visited Ibiza many times on holiday both from the UK and from where I live now, my honeymoon was in Ibiza. On one ocassion I took my new carbon bike on the plane from Barcelona, packed in its special flight case. My objective was the lighthouse right at the far end of Formentera, Pilar de la Mola. I have done this trip two or three times. I am always staying in Sta Eularia which is about 15km from Ibiza Town, so my first stage is to cycle from my hotel to the port in order to catch the ferry. On one almost fateful morning, I was coming into Ibiza Town together with the rush-hour traffic. The traffic was moving at about 25-30km/h and I was on the cycle and pedestrian track doing about 35km/h. A Range Rover appeared in the opposite direction in the centre of the road preparing to turn left into a factory drive way. The driver saw a small gap in the traffic and started to turn across the road and at the last minute, he saw me. Had he continued crossing the road, I would have hit him side on at 35km/h which would probably have been fatal, or certainly resulting in serious injury. I continued on my journey rather shaken. When I looked back at my close shave, I guess I would say that it was my fault because I was overtaking the traffic on the inside but even at the point where the car stopped in the centre of the road, he had line of sight with me. It's just that a bike is smaller than a car and not so easy to see. And had it been a road junction, I would have slowed, but it was just a gravel entrance to a factory. Had he crossed the road, the car which I was next to would also have had to make a very rapid stop.

I hardly dare tell this story, it was also in Ibiza. There was a man with a speed-boat by a small jetty in Sta Eulalia and he used it for water skiing and also for towing a "banana", an inflated yellow float on which sit about 4 people. I did lots of water skiing behind this boat and got to know Vincent, the driver quite well. I often watched young kids on the float, sometimes they fell off, I thought that was the general idea but my common-sense rather abandoned me one time. When the kids are four young girls, they don't want to fall off.
Vincent invited me to join the girls on the float and I sat at the back. I played around, leaning from side to side hoping to make the journey more fun for the girls. On the way back to the jetty, not very far out from the shore, Vincent started weaving from side to side and my movement tipped the float over and we all ended up in the sea. The girls were spluttering and not happy, the youngest was probably 12 I guess. Obviously we were all wearing life jackets but that was very stupid!