After I left Thames TV and after my divorce, I worked freelance in TV and then I started to build and sell timing equipment for show jumping and athletics.This really was a low period in my life; no savings, no permanent job. Some of the things I produced were so crude, I cannot believe it when I see them. I know it was a long time ago but even then, I was building a lot of rubbish. 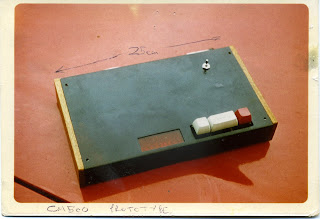 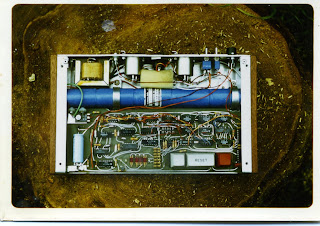 But I had one success in this period, an enormous and extremely heavy display for Sotheby’s Sale Room in London. 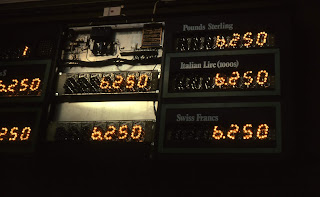 It is interesting because it also marks the stage of development of the personal computer which was still in the future. An IBM computer calculated the bidding price in 6 currencies and my display showed the currencies to the clients. But the computer was a large box and the program was loaded from a tape cassette. This was around 1977 but the invention of the microprocessor by Intel was about to change the world of computing dramatically. And it changed my world also and rescued me from a life replacing light bulbs.

The photo of a violin illustrates another job I did for Sotheby's. Their photographic department took loads of photos for the sales catalogue but they wanted a way to annotate their negatives. The camera used 5x8 inch plates and I adapted a small LED display from a calculator and placed it inside the camera, I am not sure how I managed to achieve focus, I guess because the display was mounted right up against the plate. In those days, LED displays were always red and usually very small. Now they power car headlamps and street lights which to me is truly amazing! 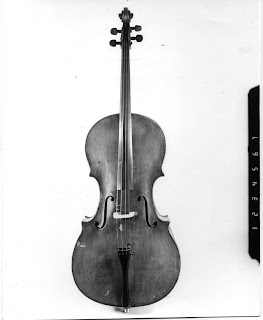 I thought I would devote a chapter to this strange period of my life when I was really down and out financially. I had finally come to the end of my career in TV, having alienated myself from most people at Thames TV.


I was divorced having failed to make a success of marriage and had made a fairly generous settlement because I felt that it was my fault. I started doing some freelance work and this is about the time Margaret Thatcher first became Prime Minister in 1979. And my mum sent me a copy of the Daily Mail where I can be seen holding a microphone over her head. 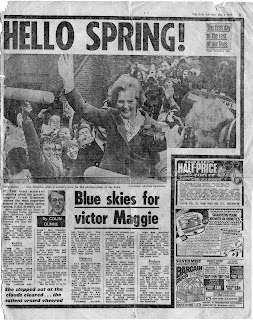 I was looking for somewhere to live, I even toyed with the idea of a house-boat on the Thames but many were old and very risky to buy. I remember looking at one which was a converted motor torpedo boat from the Second World War, all wood. This was a totally crazy period in my life.


I ended up renting a room in a cottage in Worplesdon near to Guildford, owned by no less than the Broadwood family, famous for Broadwood pianos. The room was directly above the (heavy) front door so it was not exactly a country idyll.This photo is of an other tenant in the cottage helping me build displays on the lawn. Fibre-glass flying everywhere, no protection against electric shock. 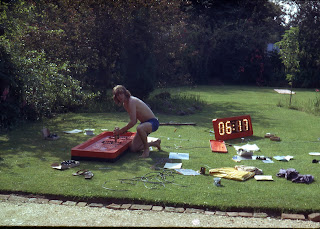 I started building timing equipment, mainly for show jumping, inspired by the success of Omega which provided sorts timing. I built small time displays which could be placed in front of a TV camera for timing events such as It’s a Knockout which was one of those silly programmes where contestants have to walk across swimming pools on slippery poles, that kind of thing. I went to Blackpool once with my timer for the BBC (hey, what a come-down from being an aspiring sound supervisor!) It used what were called cold-cathode tubes, a type of valve containing an inert gas. All was fine until it started to get dark. After maybe counting five minutes correctly, it would fail to increment to 6. And then it would start to miss seconds. In the end, of course, it was not used. 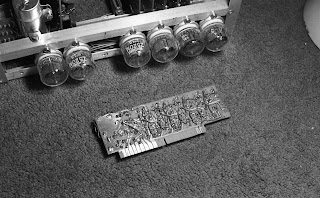 But do you want to know why this happened? The tubes required light to ionise the gas in order for them to work and, as dusk fell, this was no longer on hand. Someone told me later (maybe this is apocryphal) that a telephone exchange was built using these tubes and they had to install lights inside the cabinets to ensure they continued to work correctly.


Soon after that, of course, these tubes became obsolete and were replaced firstly by transistors and then by integrated circuits. And I used all three technologies.


But my main timing product was based on a large display, 5 digits made up of what were called “pygmy lamps”, the small incandescent lamp which I had used for the Sotheby's display.

Steve Jobs was not the only one using curvy corners! This was a friend of my landlady in another room that I rented, in Walton-on-Thames. 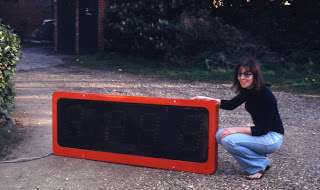 In Belfast, I was even ambitious enough to build an alpha-numeric display. 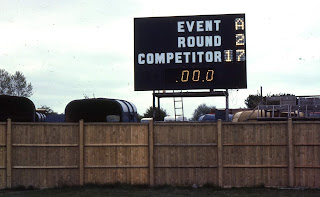 I don't know how I was making any money but I was living in a single rented room. And then who should come to rescue me from this dire period in my life? It was none other than James, a relative of my ex-wife. I guess by then I had been forgiven for causing so much misery to her. And the road led from a shopping mall in London to Dubai and beyond.


I clearly remember being at the Sotheby’s Sale Room in London watching and waiting while an IBM desktop computer whirred and clunked as it loaded its programme from a tape cartridge. (You can just see it bottom-left in the photo). 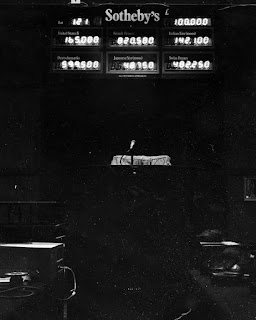 The computer was being programmed to calculate prices in various currencies as the bidding went up in Pounds Sterling. I was there because I’d designed and built a large (and very heavy) display which hung above the auctioneer; it connected to the computer and displayed the foreign currencies for all to see. I had used small mains-powered bulbs to make up the numbers and I had painted reflective paint around each bulb to prevent light from spilling onto other unlit bulbs. Unfortunately, this increased the temperature inside the bulbs and they started burning out. In the end I had to buy a variac (a kind of transformer) to reduce the mains voltage to the display. I’m not sure how Sotheby’s heard about me, they didn’t do a search in Google, that’s for sure.


I looked up an old colour slide of the display and was staggered to see a piece of Veroboard (prototype board) in there. You can see it next to “Pounds Sterling”. The crudity and complexity of the manufacturing was incredible! I can’t believe I built that thing, it’s like another world.


Another large display that I built was destined for Nigeria, in fact I went there to install it. It was similar to the red display in the photo above but longer in order to accommodate 6 digits. As I remember, it was shipped in two halves. Again, another company had written a programme on a computer, a PDP-11 (remember, this was the beginning of the 70s so there were no PCs). The project was a lottery for the state of Ilorin but tickets, previously using books of tickets, were sold throughout Nigeria so it was quite big. The main prize was usually a car. I was with the software designer in Nigeria when an awful penny dropped. Books of tickets, with their stubs, ensure that only numbers sold go into the draw. But the software didn’t take account of that, it simply chose a 6 digit number at random and there was no guarantee that the number had been sold. Oops! Well, I was in the clear, I was only the messenger. I think the whole system ended up in the Atlantic.

The designer who travelled with me said to me while we were in Nigeria that I have "an interface problem with the outside world". I wouldn't argue with that. In modern terms I would describe myself as an Intel i5 processor but with a slow USB interface!

But I always resisted becoming part of a large company - James was very successful in business and between us we would have been pioneers of what is called BMS (Building Management Systems). This is a generic term for systems in a large building such as fire alarms, access control, heating and air-conditioning. At the end of the 1970s it became technically possible to have a computer in a control room (a shopping mall for example) and by means of a 4-wire network around the building, control from a central point the various systems in the building.


Another company at this time produced a fire alarm system and every single detector came back directly to the control room. Imagine the thickness of the bundle of cable! The system which I designed had “outstations” around the building connected to a very simple 4-wire loop acting as hubs for controlling and monitoring systems in the building. Of course, this is common practise now with a number of ways of connecting the hubs. But at the time, this was all very new. And it was the arrival of the microprocessor in the mid 70s which I described in “Bill Gates and Me” that made this possible. Truly an exciting time!


And, after about four years, with projects completed in Dubai, Bahrain and Saudi Arabia, I walked away from it all much to the dismay of James and his partner in business. I guess I was just a one-man-band at heart; not a company man. And I went back to my first love, sound, which I describe in the next chapter.