Bill Gates and Me

Without getting too technical… before the microprocessor came along in the early 1970s (effectively a small computer on a chip), all my products comprised logic chips and various other components and, if I made a mistake, I would have to modify the circuit physically; cutting tracks, soldering new components. All my timing products which I described in a previous chapter were built using discrete chips; software was still in the future.

And then in 1974 Intel produced the 4040 4-bit microprocessor. Now, the functionality of the product was in software, a series of instructions in code and I could change that without recourse to the scalpel. You think I’m joking! A scalpel was a vital tool of the trade.

And at the very same time, a project came along which was made for the microprocessor. In Dubai. I was commissioned to build a system which would monitor around 4000 points around a shopping mall, control lighting and fountains, monitor security. And it all had to be controlled from a central control room. I completed the project around 1980 but I upgraded it after that when the PC came along and went back regularly up to 1999 to check it out.

This was the time of the early Apple computers and, when the IBM Personal Computer arrived in 1982, it created enormous wealth for Microsoft.

I could write a book about this period in my life but I’ll just use it now to illustrate how I came to be in Dubai in 1978 and how I decided to go back as a tourist to see how it had changed.

Bill Gates and I share a momentous time in the 1970s but our paths have diverged somewhat since then. At that time, there were computers of course but they were large and heavy and spoke a variety of different languages: Some sat on desktops but they were still large and heavy. You will probably think that I’m going to say that this period marked the arrival of the personal computer but that came later, in 1981. What changed the world was the microprocessor which first arrived in a very simple form in the early 70s.
I
So, at this time, at the beginning of the 70s, IBM was making computers (together with many other manufacturers, of course) and I was designing and building electronic devices, having aborted a career with the BBC as a sound engineer in TV. My products were digital (in other words, controlling or displaying things) as opposed to analogue products such as audio amplifiers. They usually comprised many logic chips - building blocks - mounted on a circuit board. If, on testing the product, I found a mistake, it would be “back to the drawing board” and I would have to re-solder components or cut tracks on the circuit board.

It would be wrong to say that the microprocessor changed all that; it still involved lots of chips on a circuit board but much of the functionality was in software which could be changed without hacking up the circuit board. But what happened in these traditional designs, before the microprocessor, was that everything happened more or less at the same time in various chip neighbourhoods on the circuit board. Then, in 1971, a very simple microprocessor arrived on the scene.  Intel produced the 4004, a 4-bit processor followed by the 8080, 8086, 80286 and now we have all singing dancing, dual core processors but they are still based on the original Intel architecture. Forgive me if I get rather dewy-eyed. For an electronics engineer of this epoque, these are magic numbers.

I could see the possibilities fairly quickly but I couldn’t get my head round this new way of doing things. I pored over the Intel documents but I could see no way in. At the same time as Intel produced its first 8-bit processor, Motorola had produced their own, the 6800, with a completely different architecture and they sold it in a “bubble pack” kit with one or two other support chips. I soldered it all together, pressed Reset, and the terminal printed an asterisk! By the way, at this time, I was using a mechanical teletype machine with a punched-tape reader. It hardly seems credible in these modern days but I was there. 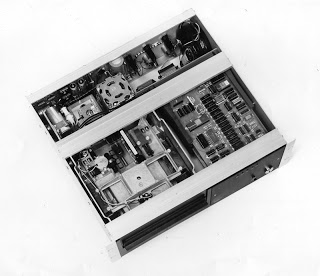 (the photo shows the “computer” that I designed around the Motorola 6800 microprocessor, with 8 inch floppy disk drive!)

So where does Bill Gates fit into the picture? I guess he is a fair bit younger than I am and he would have been a student during the later 70s. To me, his great success was not so much technical as political in that he managed to persuade various developers, all of whom had their own pet projects, to create a common effort (this is rather an imperfect way of describing how it happened). During the latter part of the 70s, the microprocessor had spawned many personal computers which no longer exist (with the exception of one, Apple, which pre-dated the PC).
Bill Gates persuaded IBM to use his operating system, MSDOS, in their new personal computer and Microsoft was born. As we all know, MSDOS grew into Windows and all personal computers, at least in the early days, used MSDOS. I know it’s a bit daft comparing my career with that of Bill Gates but I feel an affinity with him because I remember those formative years so well. And it was very exciting because, even then, one could see the possibilities. Anyway, I continued in electronic design as opposed to computer design but both used the same device: the microprocessor. Later came the microcontroller which had loads of legs which one could waggle up and down in order to control external devices. By the late 70s, I was producing what is called BMS, building management systems. This is a general term meaning control and monitoring of heating, air conditioning etc. My systems went into several large shopping centres.

Microsoft comes into a lot of flak on the grounds of monopolising the market much of which I feel is unjustified. Had Bill Gates not cornered the market by getting MSDOS and Windows as the default operating system for the PC, we would now have a plethora of different operating systems all talking different languages. A similar situation occurred several years later when Tim Berners-Lee, an Englishman working at CERN, banged heads together to persuade developers to abandon their pet projects in favour of a common language for the World Wide Web: HTML. Before that, the Internet existed but it was a network of computers all talking different languages, initially government establishments and, later, colleges in the USA. To define the Internet and WWW: the Internet, in my view, is the network of cables and wireless links which (amazingly to my mind) circle the earth. The WWW is the community that resides in the Internet. And Tim Berners-Lee still works in the constant development of the web which has to move with every new development that comes along, not the least of which is mobile computing.
I continued to use Motorola microcontrollers in my products right up to 2003 when I retired. My company gradually lost its clients due to the fact that regulations were tightening up regarding products for buildings, especially fire alarms, and they could no longer deal with a one-man-band. Incredible as it seems now, my BMS system not only controlled the lighting in the Shopping Centre but it was the fire alarm system. And I still slept at night, possibly through naivety at what might happen if it failed.

I must mention one thing before I close. At one time in the 80s, I had systems installed in various centres in the Middle East and I could phone them and update the software or diagnose problems. I used to tell friends that I could turn off the fountains in the Centre from my office in the UK. How did I do this? Spyware! Yes, effectively. I was using a remote control programme called Carbon Copy - perfectly legal. I installed the Host software in the remote PC (this is what is uploaded illegally when one’s computer is infected) and the Guest software ran on my PC back in the UK. I could go into the PC in Dubai and fiddle around with it, delete files etc. Sounds familiar? And this was before the World Wide Web; it was simply on a telephone link.

One product that I can hardly believe that I designed and built was a modem. These are very complex devices, using telephone lines to transmit data. Now the technology is very advanced. So, here is a photo of my CM336 modem. 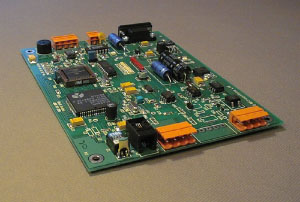